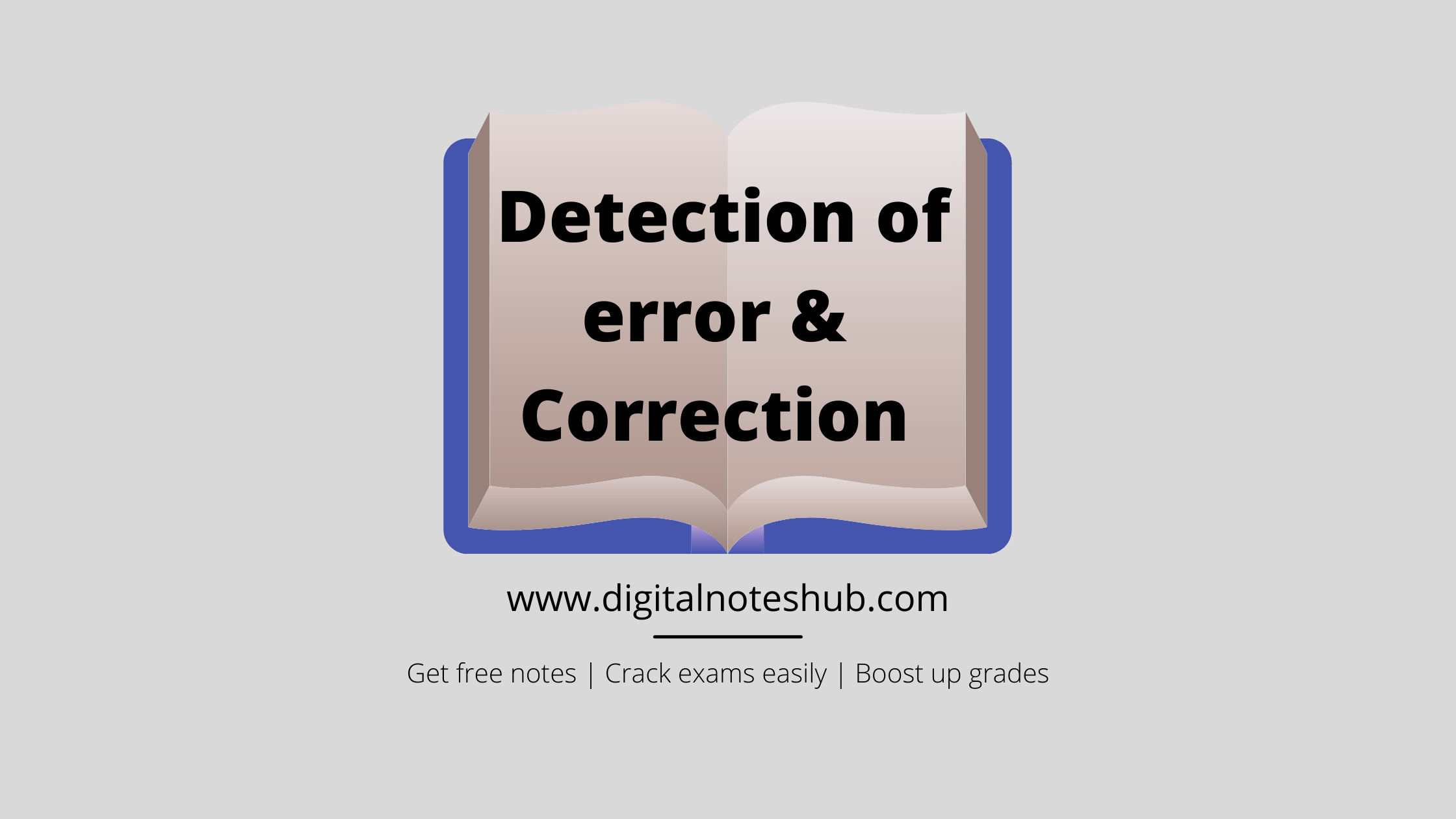 In this post, you’re going to learn about error detection in computer networks with the help of proper examples and diagrams.

In computer networks, devices are connected to each other and share information through a network. The data sent by the sender might be corrupted or lost during the transmission of data, as data is sent in the form of signals.

The interfaces can change the shape of a signal and such changes can alter the meaning of data.

An error is a situation when data received at the destination machine is not the same as data that is actually sent by the source machine.

Single Bit Error: The term single bit error means that only one bit of a data unit is changed from 1 to 0 or from 0 to 1.

Burst Error: The term burst error means the two or more two bits of the data unit is changed from 1 to 0 or vice versa.

The data link layer uses error control techniques to ensure that the destination machine should receive the exact data or message. But sometimes the data gets corrupted or lost during the transmission.

The data link layer uses the two error control techniques. These techniques are used to identify the error and to correct that error. The following are the error correction techniques,

Error detection in computer networks is the process of detecting or identifying an error in the data or message. The data link layer uses various error detection techniques for this purpose.

The basic approach is the use of redundancy, where additional bits are added to facilitate the detection and correction of errors.

Following are the different types of error detection techniques that we use for detecting an error in computer networks,

Simply parity check is the most simple mechanism of error detection in computer networks and a parity bit is used in this technique. Parity is simply an additional bit and is also called a redundant bit. A parity bit is appended at the end of the data unit before transmitting the data.

There are two types of parity bits that can be added for error detection as follows:

Even Parity: In even parity, an additional bit is added at the end of the data block to make the no. of 1’s even.

Odd Parity: In odd parity, an additional bit is added to make the no. of 1’s odd.

At the receiving end, another circuit is used, which is a parity checker. It checks the parity bits. If the sent parity bits are equal to the received parity bits, then there is no error and receiving machine accepts the data.

If the sent parity bits are not equal to the received, then it shows an error in the data and the data gets rejected. The above diagrams show the basic function of parity checking error detection.

There is one major drawback of a simple parity check that it can only detect a single-bit error. If the data has multiple errors, then it cannot detect the errors.

A table is used to arrange the data in a two-dimensional parity check. In this technique, the whole data is divided into rows. Row and column parities are calculated. Parity bits are appended at the end of the data block and these parity bits are sent along with data.

Take the example of the following data to understand the concept of a two-dimensional parity check.

A checksum in computer networks is another error detection technique. The concept of redundancy is used in this technique to identify errors. The major two components of the checksum are the checksum generator and checksum checker.

A checksum generator is used on the sender’s side and it divides the whole data into k segments and each segment has n bits. All the segments are added using 1’s complement, and the sum is calculated.

Then the sum is complemented to generate the checksum. The data segments are then transmitted along with the checksum field from the sender to the receiving machine.

It divides the data into k sections and each section has n bits. All the segments are added to each other and the complement of the sum is calculated. The working of checksum is shown in the above figure.

If the result is zero, then there is no error and the receiver will receive the data.

If the result is non zero, then it shows the data has some error and data gets rejected at the receiving end.

This technique uses two circuits, which are the CRC generator and the CRC checker. CRC generator is used at the sender’s side to generate CRC bits and a CRC checker is used to verify the bits at the receiver end.

Working of CRC in Computer Networks

In the CRC technique, the following steps are performed.

If after performing the division, the result is non zero, then it shows the error and data gets rejected at the receiver end.

Have you enjoyed this tutorial on error detection in computer networks? Post your thoughts in the comment box below.